The enormous project of restoring the William Paca House and Garden was undertaken in 1970 with financial help from the state and federal governments. The house of William Paca, one of four Maryland Signers of the Declaration of Independence, had been added on to and turned into a hotel, Carvel Hall. His garden had feet of soil over it and was asphalted and the bus station located there.
Carvel Hall Hotel and the bus station were to be demolished and be replaced by a Best Western Motel covering the entire block. St. Clair Wright understood the value of the Paca House and raised the $250,000 to purchase the property.
Archaeologists, historic architects, archivists, and historic garden design experts all worked on this project but the person behind the project was St.Clair Wright who worked tirelessly for years to bring it to fruition. St. Clair Wright had the vision to see that it could be what it was in the 18th century and she succeeded in bringing this beautiful house and garden back for present day visitors to experience and learn from.

In 1965, St. Clair Wright raised the $250,000 to buy the William Paca House and the property behind it, from Prince George Street through to King George Street.

The building on the property was a hotel, Carvel Hall, very popular with the Naval Academy midshipmen as it was the favorite place for their visiting female friends and families to stay. Behind Carvel Hall there was an asphalt covered parking lot where the bus station was located. William Paca’s house was still there, underneath the additions that were Carvel Hall Hotel. The entire property was to be demolished and replaced with a Best Western Motel.

William Paca was a Revolutionary patriot and one of the four signers of the Declaration of Independence from Maryland. Born in Harford County Maryland in 1740, Paca trained as a lawyer in London, married an hieress, served in the Continental Congress and after the American Revolution became a state senator and was three times Governor of Maryland.

Charles Wilson Peale painted a portrait of Paca, standing on the back balcony of his house. In the background are the summerhouse and the Chinese Chippendale bridge over the spring fed pond and stream that graced his garden.

Society of Sons of the Signers of the Declaration of Independence 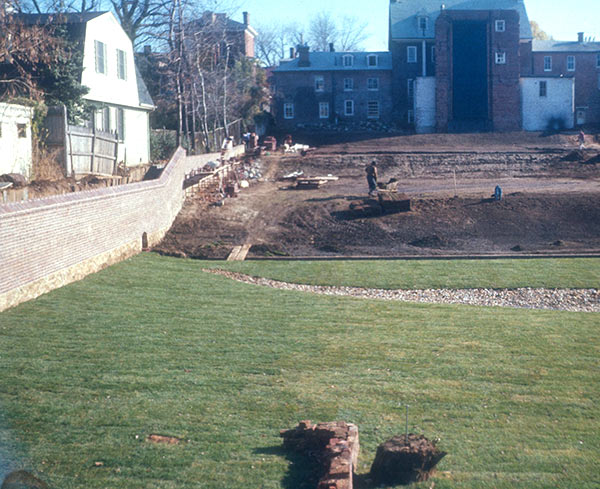 The garden restoration and the house restoration went on together. The garden restoration involved removing tons and feet of dirt and rubble, doing archeological excavations looking for the foundation of the summerhouse and the location of pathways, reopening a natural spring which flows through the property, finding the stumps of the old trees and identifying the species of tree, locating the kitchen garden and even the “necessary”. The garden’s main walkway of terraced steps was found to be off center to the house.

St. Clair was the driving force behind the house and garden restoration. She called in many experts in archeology and historic garden design to help with the project. Paca’s records of the seeds that he had imported from England were consulted. Everything down to the summer annuals planted in the Paca Garden was historically accurate.

The Chinese Chippendale bridge over the stream was contibuted by St. Clair Wright who used her monetary prize from the Louise DuPont Crowninsheld Award from the National Trust for Historic Preservation.
To help with the financing of the restoration of the house, she was awarded some federal grant money and arranged with the Federal Government to use Paca House as a jet-lag recuperation stop for foreign dignitaries before they began their state visits in Washington D.C. 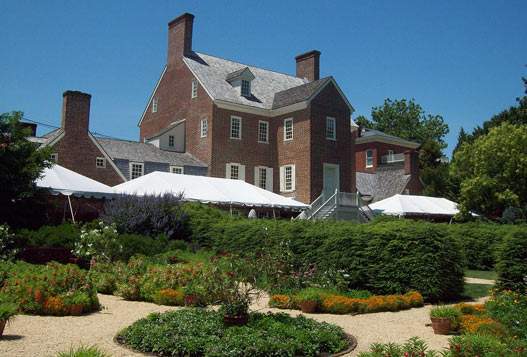 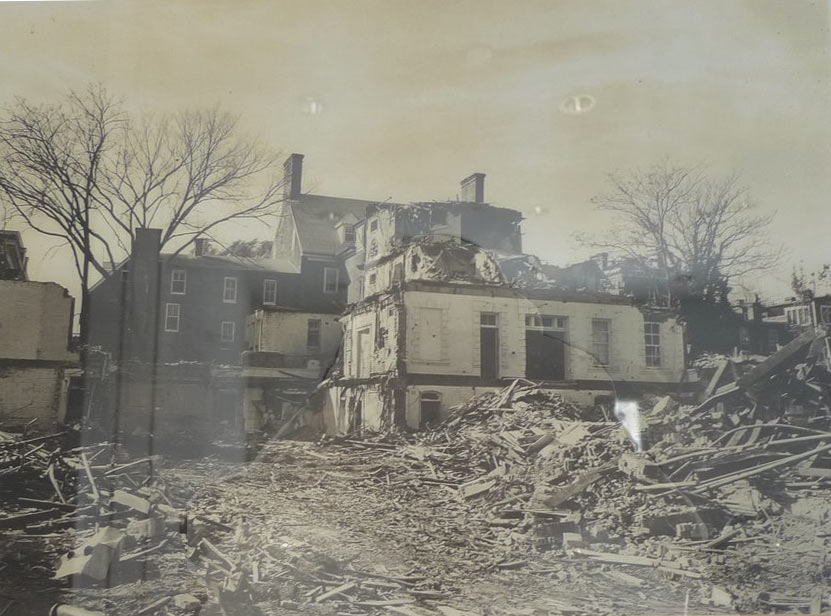 During the early restoration of the house, the interior window shutters from the parlor were removed (carefully) by thieves.

Advertising in Antiques magazines and journals did not bring them back. After that theft, guards were stationed in the house at night. But the guards did not want to stay: the house has a ghost, a gentleman in Colonial dress, and he frightened the guards. St. Clair was very excited by the prospect of having a ghost and wanted to see it herself, but the ghost never revealed himself to her. 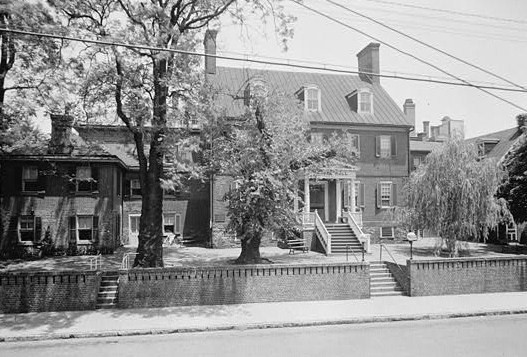 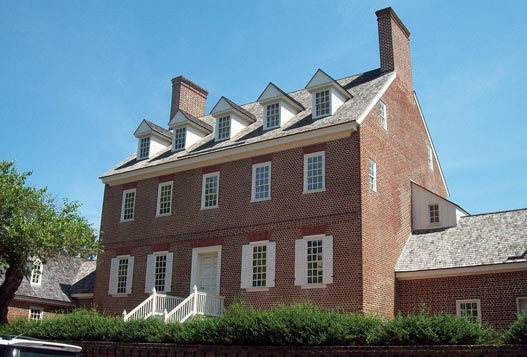 This photograph shows Carvel Hall Hotel, its two wings and the parking lot that covered the current William Paca Garden.  The hotel main entrance was at the parking lot side. The Paca House, forming the rear of the hotel,  is underneath the white roof in the lower center of the photo. William Paca’s front entrance was between the two trees. The brick house at an angle in the lower right of the photo is the neighboring James Brice House, built in 1767-1774.  Brice House never had any land attached to it and was never drastically altered. 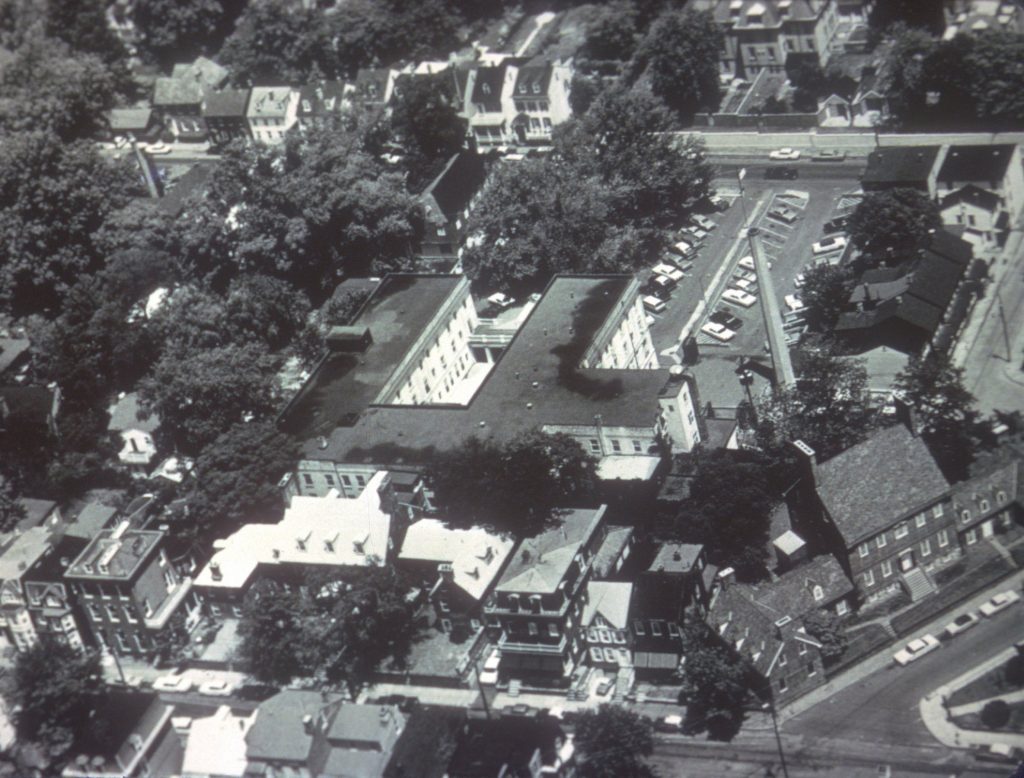