The Settlement of Annapolis

Annapolis was founded as Arundelton in 1650. It became the capital of the province of Maryland in 1694 and the name was changed to Annapolis to honor Queen Anne. The Royal Governor of Maryland, Francis Nicolson, laid out the street plan in 1695 that you still see today. The Baroque plan has two circles on the high points of land on the peninsula and streets radiating out from Church Circle and Public Circle as it was first called.

Economy & the Role of Water

The town grew slowly even with the provincial government center there. The economy was early based on tobacco, easy to ship to England because of the many waterways nearby. Rich planters lived out near their tobacco fields and the city of Annapolis was a trades center and shipbuilding and repair center.

The Golden Age of Building in Annapolis

In the mid 1700s this changed and grand houses were built in the town. This was the Golden Age of Annapolis building and commerce. During the American Revolution Annapolis’s economy suffered but the city was not attacked by the British forces. In 1784 St. John’s College was chartered, incorporating the unfinished governor’s mansion and the buildings of the 1696 King Williams School.

John Stoddert 1718 plan shows the two circles here called church circle and public circle and the streets that radiate from them. This is the plan that was drawn up by govenor Nicholson in 1695.

The Decline of Importance

After the Revolution shipping resumed. But by 1800 the size of the clipper ships was such that the Annapolis harbor could not accommodate them and much of the trade moved to the city of Baltimore. The Naval Academy was founded in 1845 and was expanded after the Navy’s successes in the Spanish American War of 1898, taking over adjacent residential streets and displacing the townspeople. Some of them moved into new houses put in former gardens of the older houses, some across Spa, Weems and College Creeks. By the 1950s the city was again expanding but not in the grand manner of the Golden Age.

The 1950s brought to Annapolis, and to many cities across the United States, the new concept of Urban Renewal. The basic premise was that entire city blocks, entire neighborhoods of mostly poor people in older or substandard housing, would be asked to leave and their neighborhoods razed for new and better housing.

Annapolis had already had a taste of this in 1941 with the U.S. Naval Academy taking a neighborhood of 93 households in two city blocks to build an athletic field house. This neighborhood, called Hell Point, was racially and ethnically and economically mixed, with Filipino, African- American, Irish, Italian, and Greek residents.

In 1952 the city acquired and tore down a much smaller community called Gott’s Court, an alley community of homes rented by African Americans. This became a municipal parking garage after everyone was displaced and their houses torn down.

This must have been a wake up call for the city’s citizens who did not wish to see great holes made in the 18th and 19th century core of the commercial and residential sections.

Water has always been the basis of the economy of Annapolis. Tobacco, grown on the nearby plantations, was shipped out of Annapolis’s port. The fish, oysters, and crabs of the Chesapeake Bay provided a living for many residents of Annapolis for many years. The U.S. Naval Academy was founded in 1845 on the site of the 1808 Fort Severn. Today, with the the overfishing of the Chesapeake, large privately owned yachts moor at the city dock bringing money and tourists into Annapolis. 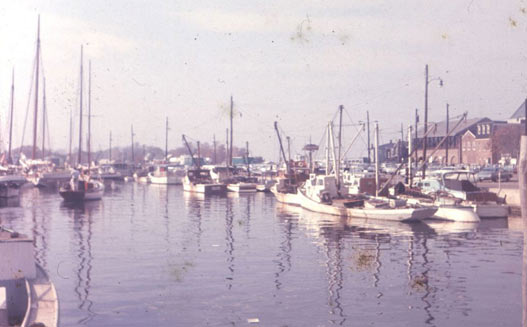 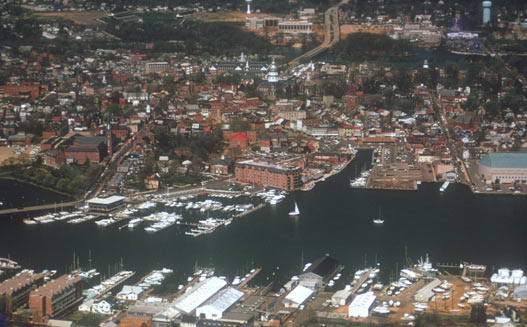 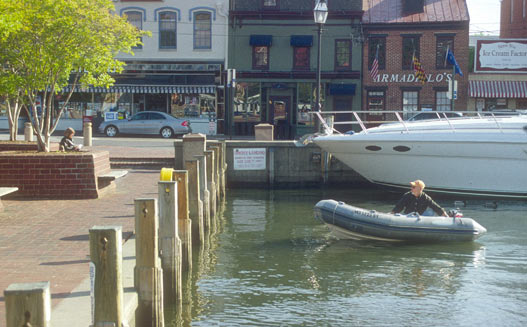 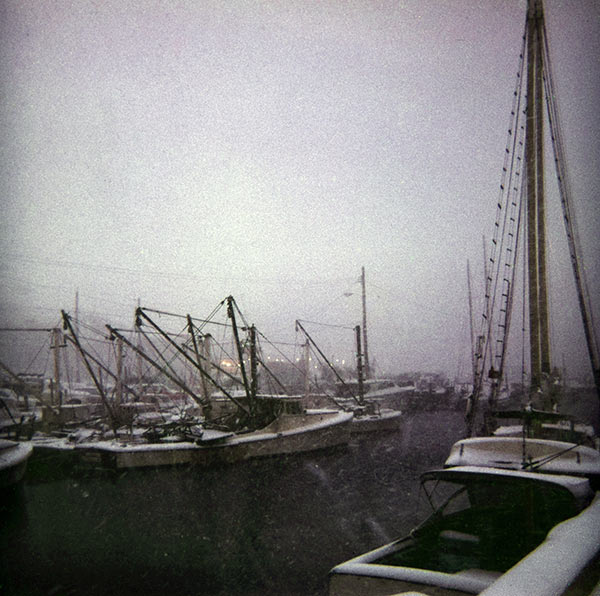 Oyster boats in the snow, Annapolis 1965.

Oyster boats in the snow, Annapolis 1965. Oysters are never harvested in months without an ‘R‘. That means that May, June, July, and August there was no oyster harvesting and no oyster boats moored and ready to go in the harbor slip.

So, oyster boats in the snow was a more common sight than oyster boats in the sunny summer weather. In the sunny summer months the dock was given over to pleasure craft like the tall masted sailing vessels in the photo. As the Chesapeake Bay’s oyster harvest declined, families no longer had a bushel of ‘Chincoteagues’ for the Thanksgiving and Christmas tables, but maybe just a half bushel or maybe only a couple dozen. Pollution played its part in this but demand also rose as supply declined. And finally the Annapolis dock was given over to pleasure craft for 12 months of the year.

Annapolis dock is always on show but actual Boat Shows, first sail boats and then power boats, take up the month of October on and around the dock in Annapolis. These boat shows have been held annually since 1970. You can see photographs and aerial videos of the dock and the boat shows at www.annapolisboatshows.com. As always, the backdrop is the very attractive city center, the steeple of St.Anne’s Church, and the dome of the State House.

Annapolis Dock currently , in 2018, has the dubious honor of being added to the National Trust’s list of 11 Most Endangered Places. A proposed hotel would be as large as and taller than the Naval Academy Field House next door, the building with the blue roof in the panoramic photograph at the very bottom of the Trust’s Endangered Places page between the asphalt parking area and the Fieldhouse.

St.Clair Wright started the campaign to save the 18th and 19th century district of Annapolis more than fifty years ago but the historic district it still being challenged. 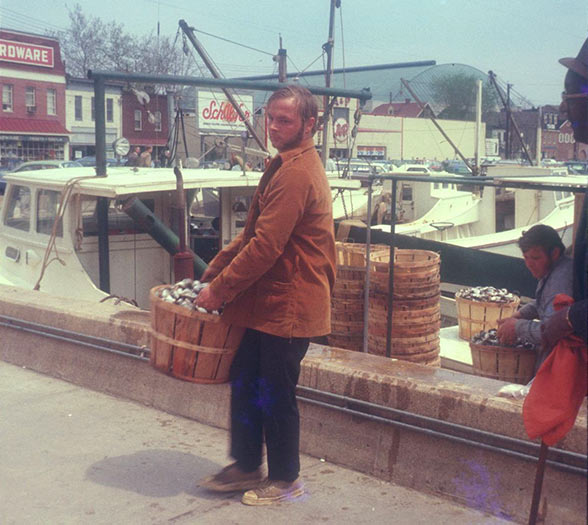 Oyster harvest on the dock.